This post is about the Renaissance painter Pieter Bruegel the Elder (1525/1530 – 1569) and why his paintings are useful for researching Renaissance clothing. In summary: 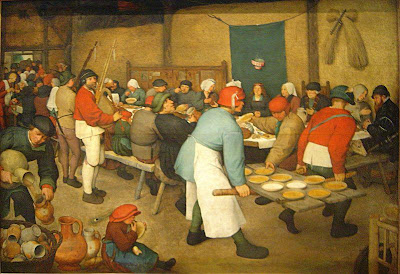 The Peasant Wedding painted in 1568 by Pieter Bruegel the Elder. [Public domain], via Wikimedia.(1)

Pieter Bruegel the Elder was a talented painter of the Northern Renaissance. His paintings feature peasants and middle-class people during the late 1500s in Flanders. Flanders was a region in Northern Europe that included parts of what is today north France and Belgium and south Netherlands.(2) 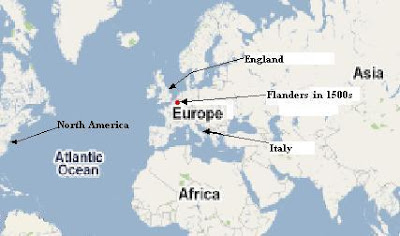 Flanders was a major economic center of Europe and many trade goods passed through the region. It was the equal, in power and wealth, of the Italian city-states. As observed in The World of Bruegel, “The creation of a great age in art . . . seems to require vast supplies of manpower and money. The Flemish cities, through their flourishing trade, had accumulated enough of both to nourish a brilliant artist flowering.”(4) This wealth resulted in a Northern Renaissance separate from the Italian Renaissance, though occurring during the same time period.

In the 1400s, Northern painters were being commissioned by Italians to paint portraits and pictures. By the time Pieter Bruegel the Elder came along in the 1500s, foreign painters were being lured to Flanders in a manner similar to the visits foreign painters paid to Italy. One thing that foreign artists sought in Flanders was the technique of vibrant colour where “Depth was suggested not by a geometrical calculation of perspective (an Italian trick), but by the gradation of hues, achieved by the painstaking application of multiple layers of paint and gloss.”(5)

Northern Renaissance art was distinctly different from the art of the Italian Renaissance. While artists of the Italian Renaissance strove to portray the ideal human, Northern painters portrayed humanity in its rougher and less perfectly beautiful terms: “. . . the Northern masters painted as they did . . . from the insight that perceives that truth can sometimes be better conveyed by a pale, awkward figure than by a gloriously graceful one.”(6)

In many of his pictures, Pieter Bruegel the Elder portrays these grittier and more realistic details of life. This is one of the reasons why his artwork is so useful to the researcher of Renaissance period clothing. In addition, Bruegel focused on peasants and middle-class people, providing valuable details of their clothing. Reportedly, Bruegel “often attended village festivities and took pleasure “in observing the behavior of the peasants in eating, drinking, dancing, frolicking about, wooing and other droll carryings-on . . .”(7) His focus was unusual because most painters of his time, and certainly, most Italian painters focused instead on their wealthy patrons and the nobility in all their glorious and colorful fabrics. Bruegel did travel to Italy for a couple of years around 1552.(8)

Bruegel’s paintings, even paintings of Biblical scenes, were placed in his century in Flanders. This is not unusual for his time and place. As Foote notes, “That it seemed logical to Bruegel to dress Biblical characters in contemporary costumes reveals a 16th Century attitude toward the past that is not easily shared today. Unlike 20th Century man, Bruegel’s countrymen were not separated from preceding ages by an abyss of feeling or an acute awareness of intervening technological growth. For them, the past was a time, not very different from the present, when the common folk must have lived much as they were living in the 16th Century. They had only a vague knowledge of geography and a murky notion of whatever centuries-long changes in costume and custom had taken place.”(9)

Also, key to interpreting Northern Renaissance paintings for clothing details is the observation that “. . . Northern painters were growing more and more worldly in their ways of handling the Bible. In the first place, the Flemish fondness for realistic detail was being emphasized more and more, to the point where Biblical incidents were often subordinated to general scenes of everyday affairs. This was particularly true of Bruegel . . .”(10)

Below are more pictures by Bruegel: 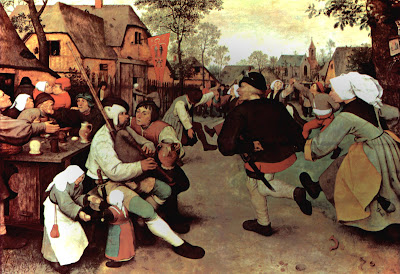 The Peasant Dance painted in 1568 by Pieter Bruegel the Elder. [Public domain], via Wikimedia.(1) 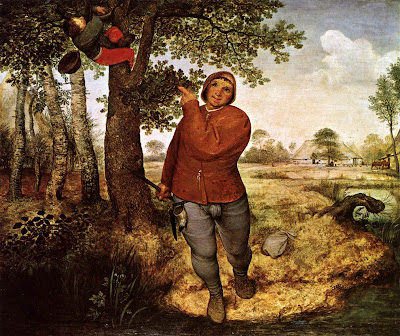 The Peasant and the Birdnester painted in 1568 by Pieter Bruegel the Elder. [Public domain], via Wikimedia.(1) 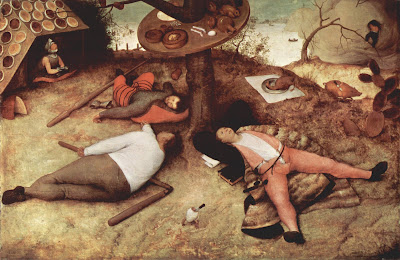 The Land of Cockaigne painted in 1567 by Pieter Bruegel the Elder. [Public domain], via Wikimedia.(ref)

Thank you for reading my blog about Renaissance period clothing!
Posted by Renaissance Clothing Researcher at 7:54 PM